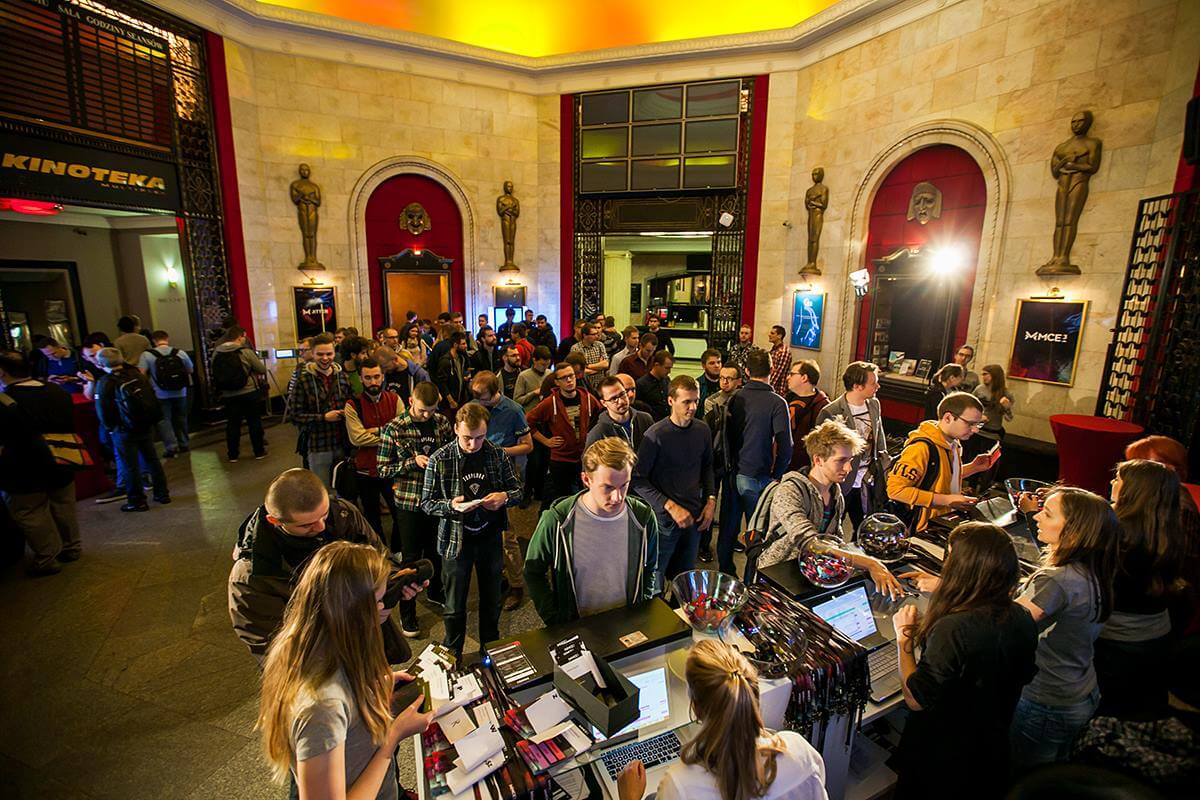 On 20th of April me and five of my fellow iOS colleagues hopped on a train and headed to Warsaw to attend the MCE^3 conference. The next day we got up early and met with the rest of our guys at the steps of Palace of Culture and Science.

The event was held in Kinoteka PKiN, a small, independent cinema. Organizers had prepared 4 tracks with many different speakers. As you can imagine everyone could find something suitable for themselves. Conference was packed with interesting talks, I had trouble deciding which ones I wanted to see.

A little fun feature was introduced to the conference – the IdeaMixer. Its goal was to promote teamwork, networking, and to encourage conversation. Attendees could engage in a set of small challenges. Upon their completion they’d be rewarded with points, and could easily exchange contact info. For example, I had to find someone with a #ProductCreation sticker on their badge (the tags had been registered online before the conference). Of course there was a ranking and I’m proud that to say that Jakub Tomanik from Tooploox finished at 2nd place! It was amusing to watch developers, product and design guys working together brewing coffee, answering quiz questions, recording short videos or intensively looking for that elusive #Designer guy to get points 🙂

MCE^3 wouldn’t have been complete without afterparties, yes, plural! It was great to talk to everyone outside of the conference setting. One thing that could have been improved was the venue, it was too small to fit everyone. When we left the party to get a drink on our own I got a feeling that Warsaw was swarmed with MCE^3 attendees. We bumped into many of them in various places during the night. It was really awesome!

It had been great to see such an extensive usage of Swift throughout the talks! More and more developers are adopting it. You could see with your own eyes how Swift’s community is evolving and maturing. I have noticed some interesting trends in conference talks. There was a lot of discussion about clean architecture and design paradigms. It seems clear to me that Swift developers around the world are turning their attention to these topics, and they are starting to see their value. It’s definitely a good shift since we haven’t been particularly focused on that before. Of course when clean architecture is presented, unit tests come to mind. We didn’t get a dedicated talk about them, but they were mentioned a lot.

Another trend which I have picked up on is an emphasis on community building and nurturing. There was a lot of discussion on open source and it’s healthy effect on community in micro and macro scope. In my favorite talk Ash Furrow elaborated on empathy, concept of mindfulness in developers’ job and community-driven development. It has really left a mark and forced me to contemplate. What struck me the most was a quote:

“Programs must be written for people to read, and only incidentally for machines to execute.”
– Harold Abelson, SICP

It seems so obvious after you’ve read it, doesn’t it? I don’t want to spoil anything too much so I’ll just stop here and recommend that you watch it when it becomes available.

Here are my top 3 talks:

All in all I think it was a terrific conference. I enjoyed my time there! For sure I’ll be there next year!

Check out what my colleagues thought of the event:

It was a blast. I’m deeply impressed by the quality of speakers. Most speakers were straight to the point, avoiding unnecessary details and focusing on high-level concepts. I liked the fact that you could talk to already accomplished engineers, designers, product managers & founders about their experiences. They were more than happy to share them with you, provided you wanted to listen. I wholeheartedly recommend attending the next year’s conference. As far as I know all talks were recorded, so you can get them at the MCE site – have fun!

This was my first time at MCE and I instantly regretted I missed the previous editions. Great speakers, awesome networking opportunities, lovely venue, what else do you need? I’ll be coming next year surely.

Great conference with great people, both speakers and attendees. Thumbs up for all the people who helped with organization of this event, it was world class job. Talks touched many mobile-related topics, so everyone could find something interesting, no matter if you were an engineer, manager or a designer. Looking forward to next edition!

Great choice of mobile-oriented topics. Ranging from strictly technical like jumping into Fastlane with Felix Krause, through startup-world struggle of trying not to fuck yourself up with Steli Efti (yes, it’s literally discussed in the talk, a lot) right to purely science-fiction speculative extravaganza of reengineering human senses presented by Carl Smith.

And when the talks end, you could swiftly (see what I did here? ) proceed to checking out pre-, inter- and afterparties, both official and unofficial, available in surprising abundance, and packed with attendees and speakers. My second time and definitely not the last one!

I think it was not only a great conference but also a great overall experience. From the very moment I entered the Kinoteka I was carried away by the amount of people and ideas gathered in one place. The conference kicked off with Ash Furrow’s talk that beautifully pointed out the importance of empathy and community in the development process.

Following his advice I decided to embrace the community and spend every break on IdeaMixer activities. Not only I had loads of fun while meeting great people but also managed to end up at 2nd place! I look forward to attending MCE2017.

Thing I liked the most about MCE’s programming talks was the focus on good architecture and SOLID principles, something I think iOS community lacked before. I recommend to watch talks given by Jorge Ortiz-Fuentes and Jon Reid about this topic – both agreed that in order to avoid problems with deprecated services and libraries, we need to embrace some well known and tested solutions – Clean Architecture in particular.

But of course MCE was not only for programmers – I also really liked the “Design Sprints” by Todd Lombardo – about how to frame problem you want to solve and what are the next steps in the process. For people who are more interested in creating their own product I recommend Steli Eftis’s talk about understanding your customer and how fucked you are going to be if you don’t do this. He’s a very charismatic speaker – even though it was my last talk, after two long days and after party, he really got my attention.

Kudos to the organizers for a great conference – everything was smooth, venue was great and most of all – the speakers were awesome. I’m looking forward to future editions!

Mental health mobile apps – a promise or a fantasy